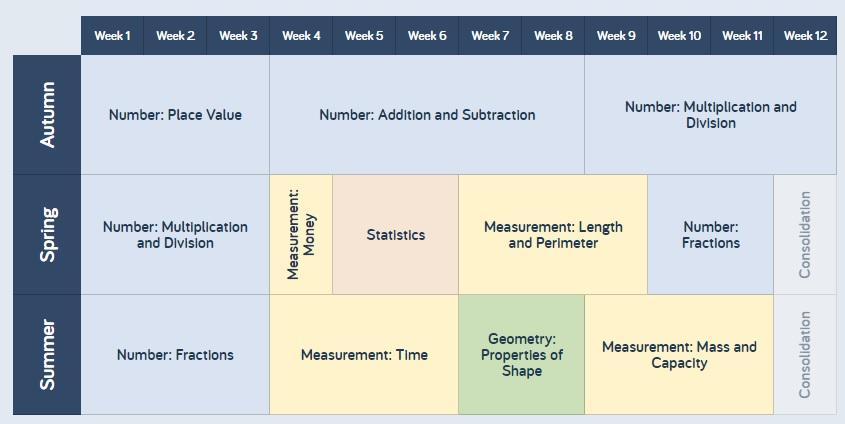 This term we will be learning how to multiply and divide. In this unit children develop their understanding of the multiplicative properties of numbers. This unit follows their learning about multiplication and division and precedes their work on money.

This unit is important because it develops children’s multiplicative and divisive reasoning by linking their prior knowledge to 2-digit calculations which involve the expanded method and partitioning to divide. These concepts are closely linked to concrete and pictorial representations to scaffold and secure children’s understanding. Children will begin the unit by comparing multiplication and division statements using and =. They will then develop their understanding of multiplication facts to link this knowledge to related multiplication and division calculations, for example, linking 2 × 3 = 6 and 2 × 30 = 60. Moving on, they will be introduced to the expanded method for multiplication and the partition method for dividing (leading to remainders). Finally, they will use their understanding of these new methods to solve mixed multi-step problems and puzzles involving all four operations.

In this unit, children convert between pounds and pence for the first time. Although children know from Year 2 that there are 100 pence in one pound, they have not converted between them. Children will move on to converting amounts such as 720p into pounds and pence and vice versa. Notation with the decimal point is not used until Year 4 so children will continue to use the structure of x pounds and y pence or £x and yp. This will help them unitise 100 pence as £1. Children next go on to solve addition and subtraction problems relating to money. They add the units separately and convert for amounts bridging a pound. Working with money in context is an important skill and questions are asked in money contexts throughout Power Maths. This unit will give children the confidence to deal with problems that arise in future units, and it is vital that they understand the key concepts, particularly around conversion between pounds and pence.

In this unit children will apply their knowledge of addition and subtraction to solve number problems involving money, including bridging a pound. In the subsequent units, contexts involving money feature regularly.

This unit exposes children to a range of ways in which information and data can be presented and interpreted. Children will explore pictograms in detail, including exploring the use of keys where one symbol represents more than 1. Children will be introduced to data presented in bar charts and more complex tables. The unit also provides a good opportunity for children to practise and apply their calculation and reasoning skills, including addition and subtraction, and counting in multiples of 2, 5 and 10.

This unit builds on Year 2 Statistics, where children were introduced to basic pictograms and block charts. This unit develops their understanding further, and encourages children to explore the range of information which they can get from the data that is presented to them. Children then apply this knowledge through the remaining units in Year 3, particularly when interpreting tables in Unit 8: Length.

This unit focuses on measurement in mm, cm and m. Children will learn how these units of measurement relate to one another and convert between single and mixed units. They will apply their knowledge of number to compare, order, add and subtract measurements of length and calculate the perimeter of 2D shapes

This unit builds on previous units on number, in particular Unit 1: Place value within 1,000 and Units 2 and 3: Addition and subtraction (1) and (2). Children will apply their knowledge of number in the context of length by measuring, comparing and ordering. They will also add, subtract, multiply and divide measurements of length as well as calculating perimeters of 2D shapes. Children will have the opportunity to transfer these skills to other forms of measurement in Unit 13: Mass and Unit 14: Capacity.

This unit is important as it builds on many of the topics covered in the Year 2 unit on fractions and progresses to introduce fractions as numbers. Throughout the unit children use a variety of key representations, including the bar model and the number line, to help their understanding as they make a whole out of two fractional parts, explore tenths and fractions as a number, and calculate a unit and non-unit fraction of a set of objects.

This is the first time that children have discussed fractions since the end of Unit 2. Therefore, the initial lesson revises many of the important areas, and important vocabulary is defined again in order to allow all children to access the learning appropriately.